Google Launches Home Services Ads: what this means for the future of marketing

Home » Google Launches Home Services Ads: what this means for the future of marketing
Previous Next

Google Launches Home Services Ads: what this means for the future of marketing

Google again has come out with an exciting new update that will help people get the most out of their queries using the engine. When people search for services, they want to find something that  exactly matches their query. Not only that, but they want quality as well. The engine has come a long way in recent years, and is now better than ever at helping people find what they want. This is the next logical step. The home service ads will appear directly in the SERP at the top. It is exciting to think of all of the interesting opportunities that will be out there for marketing in the future.

What is the update? 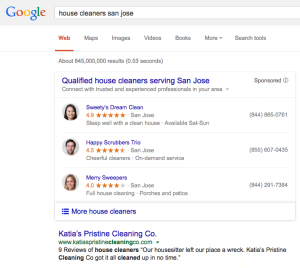 Although they announced that this update was in beta testing last month, it was originally only for plumbers and locksmiths. Now house cleaners and handymen have been added, but it is still only for the San Francisco Bay Area. In short, it allows qualified service providers to have a profile detailing their ratings, location, phone number, and some other quick info right at the top of the SERP. With your picture right next to it, the SERP is quickly become something like Angie’s List or Elance. Google conducts background checks via a 3rd party service, and once the information is submitted, they create a profile for you. We can only expect this trend to continue, and branch out worldwide following success in San Fran.

Why is it so important?

The reason this is important is two-fold. For one, it shows the continuing SEO trend toward pinpointed services. This means ranking properly for a keyword that is focused like a Martian laser beam onto your target area. Not only that, but it is the harbinger of a veritable revolution in local SEO, as well. Just like the updates to allow restaurants to make bookings, show photos, menus, and opening hours, this will change the way that local search is done for other services, perhaps lessening the importance of 3rd party sites. Just another push for power in the world of everything by Google. Writers, programmers, designers, service workers, teachers, musicians, and pretty much everyone else who works for themselves are going to need to take notice, and make sure they get with the program. On top of that, let’s consider the importance of images really quickly:

This update means a lot more business for those who get their names to the top of the SERP. So it is now doubly important to mix in the use of Adwords alongside your organic campaign. Not only that, but it should mean that your ROI on ads is going to go through the roof. People are far more responsive to ads with images, especially when they have easy access to your profile and ratings. Most consumers said ratings were the most important aspect of choosing a restaurant, and we can only assume services will be the same. In a greater sense, this only spells further specialization and focus in the SEO world. Get with the trend, or find yourself wallowing in sewers with the rest of the Morlocks.

About the Author: BlueHat Marketing Inc.

5 Tips on Choosing a Blog Topic

Is SEO for Small Business Important?

Since 2005, BlueHat Marketing has been at the forefront of search engine optimization, digital marketing, social media marketing, and web design.